A few hundred yards across and about 300 feet up from where I grew up there’s a chambered cairn. Despite having run around in the woods surrounding it rather a lot, and knowing that there was archaeology up there to be found, somehow I never came across it.

I was back home visiting my Mum and sister recently, and happened to come across a map that showed there’s now a marked route to the cairn that didn’t exist when I was wee. Checking there was enough time before dark, my sister and I set out to go up and have a look.

There wasn’t a path, as such, but the way was clearly marked by yellow circles attached to trees along the way. The natural woods just above the village are birch, before giving way to forestry land. Much of the hill is covered in mature conifers, but the cairn is in a clear-felled belt starting just above the birch woods; so much easier to spot from a distance than when I was wee!

I say the birch woods are natural, but given how close they are to the village it’s likely they were managed and coppiced at one time; certainly there are overgrown drystane dykes that suggest the land was once more intensively used. If they were maintained though, it’s long enough ago that it’s not obvious now. Interestingly, birch is generally used for its wood in the UK; there doesn’t seem to be any tradition of the birch syrup that’s made elsewhere birch is common. Having tried Alaskan birch syrup, I can recommend giving it a try; it’s similar to maple syrup, but with a more complex flavour. See the Wikipedia page for other people trying to describe it.

I was peching my way up the hill a bit but was pleasantly surprised my sister (the outdoor instructor) thought I was making good headway. I’m pretty inactive generally, but used to make good speed uphill – a combination of long legs and a knack of not really breaking my stride for inclines when others slow down.

The cairn itself was kind of interesting – not on a world-class prehistoric monument sort-of-a scale, but just because it was plainly something, but difficult for a lay-person to interpret. 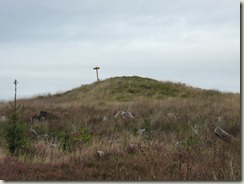 There’s an obvious mound, as you can see in the approach photo. Once you get closer, there’s obviously structure to it too; but it’s less obvious what the structure is. There are a number of stone-lined pits and what might be walls, but those descriptions make them sound very clear and understandable. This is what the pits looked like: 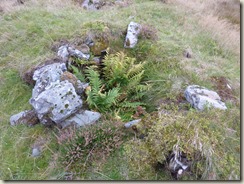 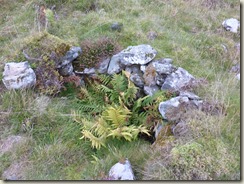 In other places, gaps between the stones led into small voids: 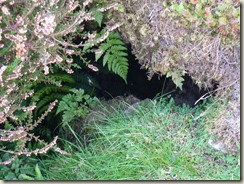 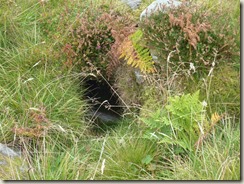 It was both interesting to look at, and frustrating because I didn’t really know how to interpret what I was seeing. Are the pits chambers, or cists? Did they have roofs? Were they originally buried? Were they always open (probably not)? Are the bits that are still covered chambers? Is the bit with what might be remnants of a wall a forecourt (probably)? Was the largish white quartz boulder of any particular significance? Well, I dunno.

There are some archaeological notes online, which I didn’t have at the time, and which don’t tally particularly closely with my memory of the site, although the general layout in the description matches. Perhaps if I’d had them with me I would have been able to tie things up better.

On the way back down, we went through the part of the birch woods we spent most time playing in over thirty years ago, and found the last remnants of our aerial runway – a very thin and fragile-looking piece of rope still wrapped around a tree branch, very much the worse for its decades of exposure. On the way back into the Clachan we harvested some brambles. 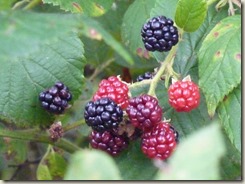 In some ways, the cairn remains a bit of a mystery, but it’s good to at least have seen it after all these years.