I spent the first few weeks of January in California. Because I was particularly keen,

msinvisfem and I caught a train into Los Angeles to go and visit this place: 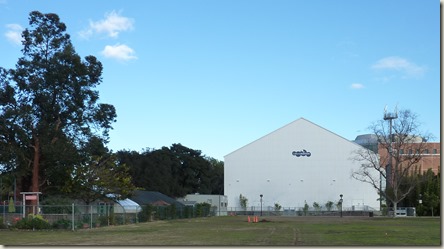 We paid more than we needed to for the train, as I made the mistake of going to a window for service in the station rather than buying from a machine. Different train company, as we figured out later, and happy to charge us getting on for twice as much without even mentioning that there was a cheaper and more frequent alternative service.

We got off the train in LA Union Station, found our way outside through the impressive waiting room and walked down the road a bit for the Metro Silver Line (a bus service, despite what it may sound like). We both checked the route signage, waited for a bit, and got onto the right bus heading in the wrong direction.

When we reached the end of the route without spotting our destination, it became clear that something had gone wrong, and a helpful cop who managed to keep a straight face throughout directed us to the correct stance to go back again.

By this time, the generous safety margin that we’d allowed for getting there before our timed tickets were due to take effect was looking a bit shaky. In fact it was worse than that, as it turned out. By the time we’d returned to Go, did not collect £200, and headed out in the right direction for a similar period of time, our safety margin was completely blown and we turned up half an hour too late.