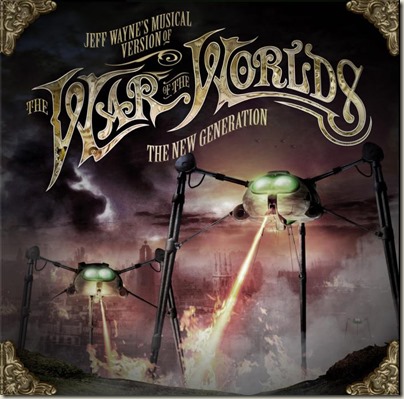 This is a modern re-recording of the classic with, as the name might suggest, a new generation of artists. Probably just as well since Richard Burton and Phil Lynott are a wee bit dead to be taking part this time around.

Instead we have Liam Neeson taking on the Richard Burton role, Gary Barlow standing in for Justin Hayward, and others including Ricky Wilson of the Kaiser Chiefs, Joss Stone and Maverick Sabre. Yeah, we’ll come back to him.

Names such as Gary Barlow may give you pause. Funny how twenty years or so of maturing doesn’t doesn’t translate “boy band” into anything but, well, boy band. (At least Robbie Williams managed to cream off the Angels share…) Hold that prejudice though – he has a good voice, and does a pretty good “Forever Autumn”. It’s nearly as good as Justin Hayward’s.

There are three possible reasons for a remake. One is to do it better. Another is to do it different. Though The New Generation is a decent effort, and you’d probably love it if you’d never heard the original, it does neither of these things.

So the third reason it must be; to draw in a new audience haven’t been exposed to it before. I guess that’s commercially fair enough, but artistically disappointing.

Annoyances are not major, but there are several. The music develops a judder at a few key dramatic points, and distorted, echoed lyrics at others – both electronic tricks that already feel more dated than the original album. There are additions to the narration that feel pretty unnecessary – is it essential for us to know that Martians don’t have sex? – and, oh dear lord, who thought we needed chirpy Cockney newsboys à la Dick van Dyke, singing “Morning paper, men from Mars, men from Mars!” on Horsell Common?

And if you’ve listened to any Jeff Wayne War of the Worlds material produced in the last fifteen years or so, you won’t be surprised to hear that the voice of the devil Martians is heard in the land! It will be the phrase you think it is, plus a load of unintelligible background muttering. While I liked it the first time I heard the Martians speak (in cut scenes from the 1998 video game), it’s a shame they haven’t learnt to say anything new since then.

Good points include the gorgeous packaging, which could only be improved upon by making it the size of a proper 12” album. It’s a nice touch that the changes to the words are printed in gold, as it saves highlighting them with a green marker. Liam Neeson is not generally my favourite vocal performer. but he makes a fair replacement for Richard Burton and I even felt that he conveyed the emotion of relief at the conclusion better than Burton did (I’ve seen another review say the opposite, so your mileage may vary).

I can’t put it off any longer. Let’s come back to Maverick Sabre. Cool name! Unfortunately that’s the only thing he has over Phil Lynott, who might well have called himself Maverick Sabre too if he’d thought of it. Thing is, though, Phil would have lived up to it, the way he hammed up his Preacher in the original War of the Worlds, to the enjoyment of all. Maverick Sabre’s Preacher – well, I struggled for a while to identify how best to characterise his voice in the role. Is it spoilt child or querulous old man? Thinking of the character, you may think that either might work, but take it from me they don’t. It was on the fourth listening that I nailed it though, when he quavered “don’t touch me!” – he reminds me of nothing so much as the camp German pigs from Shrek! The rest of the album is OK; I am a little disappointed with minor aspects of it, but Maverick Sabre’s part is the only thing I wish just wasn’t there.

If you’re a fan of the original album, don’t get this one unless you’re a completist. It’s good, but ultimately it doesn’t add anything. If by some weird mischance you're reading this and you haven’t heard the original, then you might like either better – probably the one you hear first – but you’ll be down with all the cool kids if you choose to make that the original*.

* Caveat: a wise and cautious reader will check my profile picture before accepting my advice on what’s trendy.