It’s been a while since I wrote, you know, actual words here – nearly six months, which is my longest gap ever – so I thought I’d make a cursory effort and record the weekend.

It started on Friday, with a day off work and a trip on a whim to Kirriemuir where my Dad grew up and where we visited my grandparents for many years. As with anywhere you haven’t visited in a while, there were changes. The Star Rock shop (established 1833) was still there, but across the road was a railway modelling shop that I hadn’t visited before, and I came out with my wallet figuratively lighter.

The square now features a statue of Peter Pan – apparently it’s a replacement for the one that used to stand in the Glengate, but which got damaged – and the Town House which I remember housing Kidd’s the chemist is now the Gateway to the Glens museum. 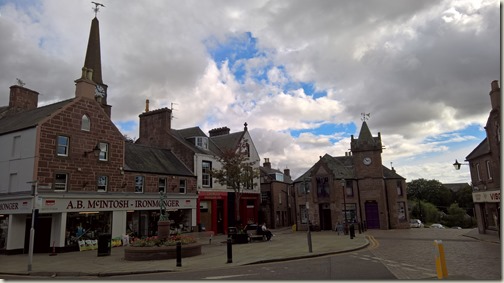 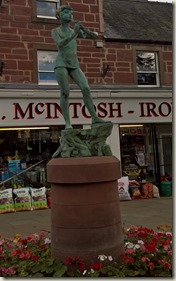 Inside the museum, there’s a model of Kirriemuir in the 1600s, which I enjoyed seeing, and the silver casket and illuminated scroll given to J.M. Barrie when was granted the freedom of the town. I hadn’t realised he was buried in Kirriemuir as well as being born there – I’d always just assumed he’d been laid to rest elsewhere.

Kirrie’s other, more recent, famous son has also been honoured with a statue since last time I visited. I had seen the flagstone to his memory in Cumberland Close, but now he stands in effigy opposite the Gairie Mill. 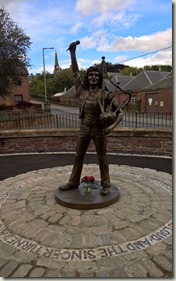 Friday evening was spent pleasurably in the company of

Perhaps not as rock and roll as Bon Scott, but just as cool in her own way, on Saturday I was on my way home from spending the afternoon with friends in the Whey Pat when I spotted on Twitter that Sydney Padua was in town for a conference of mathematical biographers, and had gone to the Whey Pat shortly after we left. I hopped off the bus again and was able to shake her hand and tell her how much I liked her book (Buy it!). A very pleasant surprise.

@ggreig @UHMMOxford oh that was you! Really nice to meet you!