The BBC used a photo of mine as one of “Your pictures of Scotland” this week. It was taken from the bus stop in Dundee on my way to work on Tuesday (sometime around 08:15), and is looking over the V&A construction site and across the Tay towards Fife. Here’s my approximation of the BBC’s crop (it was easier to reproduce it than try to steal my own picture from the BBC page): 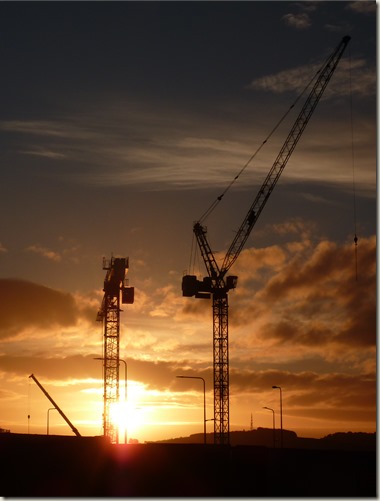 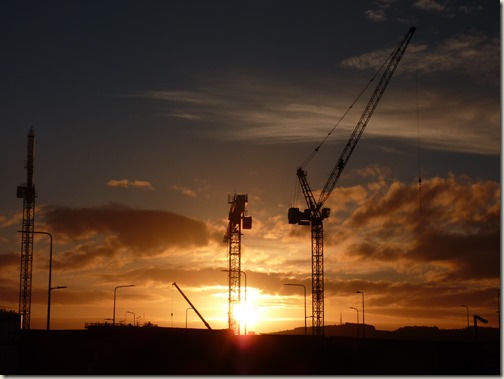 The crop gets rid of the crane on the left, which certainly makes for a better composition, but in going portrait I feel the breadth of the sunrise becomes a bit constrained.

Last time I submitted a photo to the BBC (some years ago) they just published photos “as is”, so it’s interesting to see how things have changed, and how a professional would choose to present my picture.

I generally leave my own photos untouched, unless they badly need something done or I need them for a specific purpose; they’re my memories more than art to me – and I’m not an artist, and have dodgy colour vision. Best leave well alone! However, if I were cropping it myself I would probably have gone for something like this: 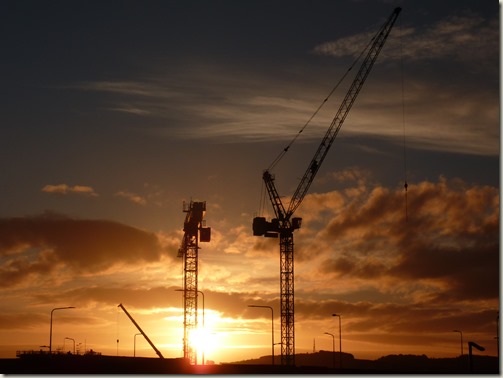 The BBC version is probably still better, because it focuses on the features of interest centre stage – I think my cropping choice suffers slightly from the additional street lights to left and right. If they weren’t there, I might prefer my version, but as it is they’re a slight distraction. Losing some of the hoarding around the V&A construction site also reduces the contrast in the photo and makes it appear a bit more washed out. I could easily have kept that by changing the proportions slightly, but I preferred to keep the original aspect ratio.

The crop is the only change made between these three versions of the picture.

I’d be interested to know which others prefer. For me, it’s probably the order in which they appear in this article, but it’s a slightly reluctant choice – I’m attached to my original with its flaws!