Or, Reinventing The Torch.

In Doctor Who, the Master’s signature weapon is the Tissue Compression Eliminator, which kills by shrinking the target to the size of a doll (the scale of the doll is, for some reason, never specified). It’s mostly used by the Master as played by Anthony Ainley in the 1980s, and in those stories takes the form of a thick rod with a bulb at the end that opens, crocus-like, to fire a red beam.

However, it made its first appearance in the Master’s very first story, Terror of the Autons, in which Roger Delgado’s Master wielded a rather more stylish version resembling a cigar, and fired by pressing with the thumb: 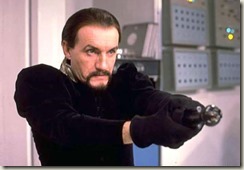 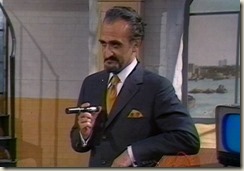 Knowing I was going to be attending a Doctor Who convention and would be expected to dress accordingly, it occurred to me – before last season’s revelation about the Master – that a) I had the beard for the part and b) had always fancied a jacket with a Nehru collar. A bit of hair colouring would convert my largely white beard to the original Master’s two-tone badger-style goatee. Couldn’t do much about the hairline.

What I couldn’t easily accept, adapt or get hold of, however, was the Master’s TCE, so I thought about building one.

My first thought was to buy aluminium tubing and telescope short sections of it together, but it proved difficult to find sizes guaranteed to telescope and although the prices were reasonable for the amount I wanted, minimum order amounts were – less so. I headed out to the nearest hardware store and inspiration, of a sort, struck. Toilet roll holders – the sprung, plastic sort – would do the job for a few quid.

I bought a handful of black ones on the spot to experiment with, and ordered some silver ones from eBay. The black ones were noticeably better quality, but using a silver one as my base would give me a much better finish for the sliding section than I could possibly have achieved using paint. I also found I could fix some if its issues by opening up a big enough hole in the larger end to work the weedy spring out and replace it with a stronger spring from one of the black ones.

Having found something that could form a good base to work on, the next thing to consider was what to put inside it if I wanted it to appear to work. Well, electrically that’s not hard. What I would need would be a power source, and something that would light up when a switch was closed. It’s a torch!

With appropriate circuit board to mount them on, I could fit seven LEDs (arranged hexagonally, with one in the middle) within the diameter of the toilet roll holder. A bit of browsing at Proto-Pic turned up what I wanted; a 1" circular protoboard. I did have to trim it down a bit to fit, but it gave me a good starting point. I also got some Super Bright Red LEDs. I already had resistors to hand, and a small selection of switches which happened to include a suitable one.

The circuit couldn’t get much simpler and was easy to throw together on a solderless breadboard just to check everything worked. Then the tricky bit was to work out how to wire it up in practice, cram it all inside a toilet roll holder without breaking anything, and provide a way of activating the switch.

It was obvious the LEDs would have to be mounted inside and at the front somehow. However, a single toilet roll holder was neither long enough to represent the TCE, nor would it be possible to mount the LEDs inside its broader half – there would be nowhere to attach them, and that space also contained the spring. Even if that hadn’t been the case, it would have been very tight and might have necessitated cutting down on LEDs. This is where the black toilet roll holders came into play.

By cutting the bigger part of a black toilet roll holder to a suitable length, and then sawing a slit along it, it was possible to prise it open and fit it as a sleeve around the silver one. This again gave the right colour without the need for painting, and it made it possible to extend the length of the TCE with a double skin – an inner, un-slit tube simply stacked on the front of the silver one, and a slit sleeve embracing them both. The slit tubes would require filling later to cover the gap, but again a good structural foundation was in place.

With the idea for the extension of the muzzle established, the problem of where to mount the LEDs was solved, as they would go inside that rather than the body of the main holder.

With that settled, the next most obvious decision was that power would have to go at the other end, so that it could be easily inserted and replaced. To power the LEDs, I wanted a 6V power supply. Within the space available, that meant I’d need to go with with several watch batteries, but I managed to get an AAA battery holder that fit nicely inside the thinner half of the toilet roll holder, and found that LR44 watch batteries would fit nicely within that. Taping four 1.5V LR44s into one slightly bigger 6V battery with insulation tape and adding a longer spring to the battery holder to hold them in place solved the power supply problem.

With both power and light source at least notionally sorted out, the tricky bit was how to connect them up successfully, with a switch in between that would be activated by the narrow end of the toilet-roll holder being pushed in.

How To Press The Switch

I had a small press-to-close switch that would fit inside the narrow end, and was about the same width as the battery holder. I could mount it (and the resistor) at the positive end of the battery holder, and hopefully attach some sort of plunger to the far end of the toilet-roll holder that would come down and press the switch closed when the smaller tube was pushed into the larger one.

I considered other alternatives, the main one being conductive paint on the outside of the small tube being brought into contact with more on the larger tube, but whenever I thought about reliability, I came back to the plunger option. Paint would have been very prone to wear and tear, and (as the conductive paint is black) painting over it to restore the silver look would reintroduce connectivity problems and spoil the look.

However, a plunger presented problems too. It had to be long enough to press the switch, but not so long that it would cause mechanical problems by pressing too hard – a tricky measurement to make confidently inside a tube and out of sight. It had to be broad enough to be sure of hitting the switch, and to prevent it being easily knocked out of alignment, but narrow enough to avoid catching on the lip of the narrower tube, and getting caught up in the spring. Finally, it had to share the confined space with the wires connecting the power end of the assembly to the LEDs, without fouling or putting strain on them – or doing the same to itself.

The solution I came up with was to build a plunger that was fixed at one end, but had the other end sprung.

In order to accommodate a spring with the least hassle possible, I started with an old modelling paintbrush for the shaft of the plunger. It was roughly equivalent to a piece of narrow dowel, but with the advantage of being already hipped. I measured things out and cut it so that I could just slide a small spring on, and the broad part of the paintbrush would hold it in place. Then I built up each end with Sugru and a circle of plastic card to fix things, provide flat surfaces at either end, and make the plunger robust.

Making one end of the plunger sprung provided a couple of benefits. It allowed for a soft press on the switch, so that it didn’t matter so much if I didn’t get my measurements quite right; and it prevented catching on the lip of the narrower tube from being a problem – if it did occur, the sprung tip would flex slightly until it just slipped in, rather than getting stuck.

The most worrisome part was getting the wiring to share the same space. Ultimately, I just drilled holes through the ends of the plunger for each wire, with enough space to let it move fairly freely, and hoped. 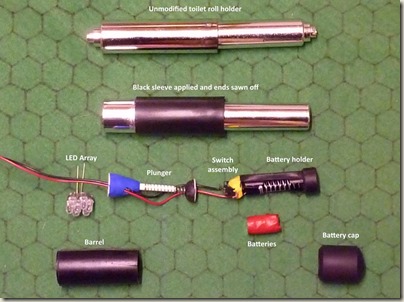 Having – more or less – worked  out all the parts necessary, it was time to try to bring everything together. I’ve not done a lot of soldering in the last 25 years, so creating a circular array of 7 LEDs wired in parallel kept me busy for a while, and worried about short circuits, as there wasn’t a lot of space to work with the wire I had. Connecting up switch and resistor on a little piece of protoboard and connecting it to both the battery holder and the wire that would connect to the LEDs was challenging within the space available too. Both of these went well, though, and I used more Sugru to fix the switch assembly firmly in place (and provide a bit of additional insulation) at the positive end of the battery holder.

Where I messed up – though I didn’t discover it until later – was the simplest part of the soldering. While connecting a wire to the negative terminal of the battery holder, I overheated the plastic and managed to break the connection between the metal terminal and the spring holding the battery in place. I tried to keep testing everything was still working at every stage, but I missed this and had some worrying debugging of connections later on with a multi-meter when stuff just didn’t work! When eventually discovered, a combination of conductive thread and paint remedied the issue.

I fed the wires through the plunger, with excess that could be cut back once I knew how much slack would be required to attach the LED assembly but allow the battery holder to be pulled out for inserting or removing batteries, and I drilled some extra holes through the stationary end of the plunger to allow me to fix it in place more firmly with thread or wire. I tried thread first, but it was too fiddly and difficult to get right, so I fell back on aluminium modelling wire – and another layer of Sugru to fix the LED assembly in place and avoid short-circuits!

As already described, the exterior of the barrel was to be built up with parts of the black toilet roll holders. With a bit of specialist super glue for awkward plastics, these went on firmly and the large lengthwise gaps left by slitting them and the smaller circumferential one between the two sections were filled with black Sugru, which I then rolled on greaseproof paper to try to get a reasonably smooth surface. The result wasn’t perfect, but good enough if you weren’t inspecting it closely. The interior of the barrel was painted silver.

The butt end, where the battery holder was inserted, was covered up with a cylindrical rubber ferrule (sold for the foot of a chair), which was just right for the job of a battery cap.

Finally, I added a a bit of copper trim – two strips of plastic card covered with Bare-Metal Foil and attached with the plastics super glue. One covered the join between the two sections of black tubing nicely. 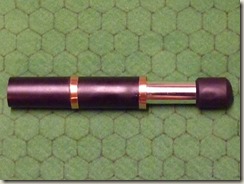 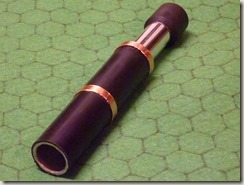 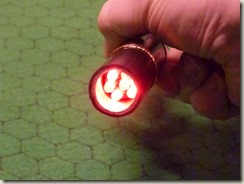 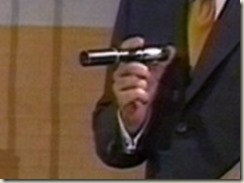 The final picture shows the original, for comparison.