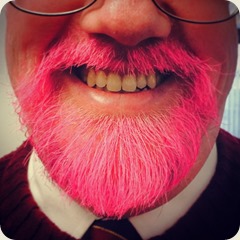 Friday was Wear It Pink day, in aid of the fight against breast cancer. Usually my contribution to these things when they pop up at work is limited to that – a contribution – but this time I was marginally more organised than usual. I don’t possess any pink clothing but it occurred to me there was something else I could “wear pink”.

There has to be a benefit to going white…

A while back I decided that occasionally it might relieve the boredom to try a different beard colour; a few people have seen me in blue, but Friday was a bit more high profile. Don’t expect it to be a regular thing, and even less so at work, but if I feel like it…

A bit of research turned up Manic Panic’s Dye Hard as a respected brand that washes out easily. For the pink, as a paler colour than the blue I’d tried before, I actually applied white first (to cover the darker patch remaining on one side of my beard) before applying the pink on top.

The colour combs in easily, and the odd over-enthusiastic application will mostly just wipe off, though it is possible to apply it a bit heavily and wind up with colour on the skin behind the beard. It dries quickly and is good for the rest of the day.

You do have to be a bit careful with a moustache, which should be well-trimmed – otherwise you run the risk of having the colour wash off in drinks, for example. Depending on what you want, you may be best not colouring the moustache. While I went for complete coverage in pink, the contrast between a blue beard and white moustache is quite effective.

The colour also helps with hold once it’s dried, so it’s fairly easy to stay tidy-looking. When the time comes to wash it off, it is really easy to get rid of – a couple of splashes and a bit of a scrub and it’s gone. In fact, it’s so easy to remove I was a bit concerned about being caught in the rain, but I didn’t have any problems in practice. I took the tube and a comb along in case touching up was required, but they weren’t called upon.

Work posted the picture above to the company account on Instagram and I received an e-mail today saying it had got their “best ever response to a picture” – defeating the previous champion, a picture featuring a cute puppy, by a respectable margin.