For Christmas, my sister gave me a Royal Navy 50 foot Picket Boat (from HLBS) in 28mm scale, and I spent time over the New Year period painting and assembling it. 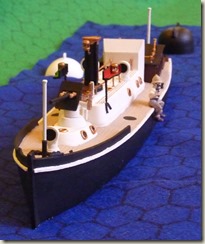 The boat is a steam pinnace. “Pinnace” has a couple of possible meanings but in this case means a smaller boat carried by a larger ship for use as patrol boats, for ship-to-shore operations and as a defence against torpedo boats – the pinnace would be fast enough to respond to a torpedo boat, and was armed with one or more gun (a Hotchkiss 3 pounder in this case) that would allow it to respond at range. The other gun, not present on my model, might be a Nordenfeldt or Maxim machine gun mounted on the roof of the rear cabin.

This type of pinnace was in use from 1880 right up until the Second World War, with 620 in service during the Great War, so excellent for a steampunk setting.

The kit mouldings are very crisp and clean, mainly in resin with white metal for the finer details and fine plastic rod for the hand rails. The main thing required for painting it was a steady hand (never really got the hang of masking tape), though patience came in handy too while applying several layers of white paint to get a decent solid finish. The only thing I’m a little dissatisfied with is the rear cabin, which is a bit dark in colour and I feel I could maybe have done better there. Good enough though, and I’ll leave it. 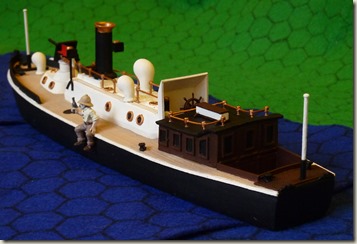 I had a few minor issues with the parts. The shoulder rest on the Hotchkiss 3 pounder doesn’t have an obvious place to attach it. I checked images of similar guns on the Internet and settled on a location to fix it; I then had to break it off and try again when I discovered the gun couldn’t pivot due to the shoulder rest hitting the top of the engine house. One of the stanchions for the handrails broke (recoverably). One of the cowl vents doesn’t sit comfortably in the space left for it, and some of the instructions could have been clearer.

Finally, I wondered whether the scale was quite right everywhere, as the spaces to be occupied by anyone operating the gun or steering the vessel seemed extremely cramped.  This might be just economy of space on an efficient working vessel, but in particular the space at the wheel is very restricted. Over all the issues were all relatively minor though, and didn’t distract from a very satisfactory model.

As far as colour schemes are concerned, I aimed to make it look more Victorian than 20th Century (which would have featured more light grey). I also went for black rather than blue, so it’s a perfectly normal pinnace; blue would have identified it as an Admiral’s barge. Picket boats such as this don’t seem to have had a lot in the way of individual markings – not even a name – so that helped to keep the paint job simple. If I ever feel brave enough, I may add a bit of coal dust around the coaling holes (the black circles on the deck amidships) using weathering powder, but as a working navy vessel I’m assuming it would be kept pretty spick and span most of the time.

There’s a surviving pinnace of more or less this pattern which is believed to be the last remaining naval steam boat in the UK. Steam Pinnace 199 was built in 1911 and now belongs to the Royal Naval Museum in Portsmouth. Steam Pinnace 199 was an Admiral's barge, so you can see the blue colour previously mentioned. There are a couple of interesting videos on YouTube: