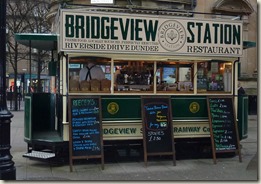 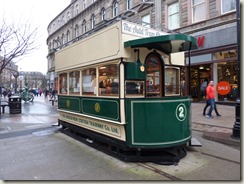 Unfortunately it’s not fulfilling its original function – might be a bit tricky without a full set of rails – but it’s back sitting on such rails are available, and interesting to be able to have a close look at it. It last saw service here as an actual tram over 100 years ago.

It’s now The Auld Tram, selling coffee and sandwiches. Must try the nosh some time; so far I’ve not been sufficiently hungry when passing by, but it looks like they’re aiming for high quality but satisfying. It’s an offshoot of Bridgeview Station, a restaurant overlooking the Tay Bridge with an 1870s railway carriage.

Something else to look out for later this year will be the opening of the fledgling Dundee Museum of Transport.