Earlier this month, I came across a model maker I wasn’t aware of before, selling his work through eBay. Nathan Yeoman works in a selection of scales, and across a variety of subjects. The common element seems to be quirkiness, in the best sense. If you wish something was available in your scale, but no-one else is making it, then maybe Nathan is.

So if you need (or just want) for example: a V1 rocket and launch ramp in 1:100 scale (or a V2); a Horten Ho 229 in 1:144; assorted GWR buildings; Nissen huts or a brilliant selection of call-boxes, including AA and RAC, then take a look at Yeoman Models. The blog in particular seems worth keeping an eye on.

Despite being tempted by some of those things, what I went for was a selection of Victorian street furniture – three post boxes, a water pump, a snowman, and a selection of manhole covers:

They’re all sitting on a tile of Wills Granite Sets, a nice, cheap way of getting a set of cobbles just about the right size for basing a 28mm horse-drawn vehicle, and accompanied by a 28mm figure for an idea of size. As usual, you can click through for a full-size photo.

Apart from the snowman’s arms, which are metal, these are all resin and include some fantastic detail. The cast lettering on the pillar boxes and drain covers is crisp and legible - my photos don’t do the moulding justice, even at full size, but you can read the words “Post Office” on the Penfold pillar box (the middle one). For reference, here’s a photo of a real one in the village: 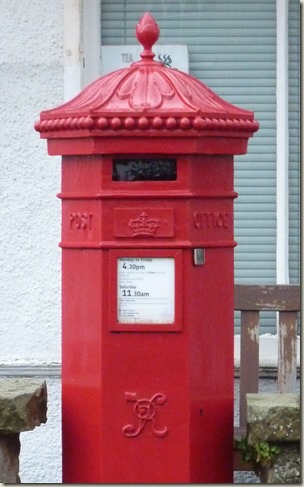 For fans of The Talons of Weng-Chiang and associated audio spin-offs, one of the manhole covers bears the legend “Jago & Litefoot Ltd, Limehouse”, while another was apparently created by Yeoman & Sons! 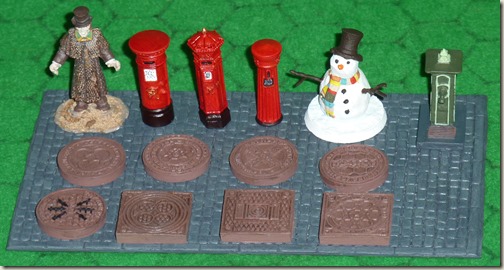 The pillar boxes were painted in a red acrylic from Inscribe, with details picked out in black, white and gold. They were finished off by an application of Rotring Artist Color red ink which helped deepen the shadows a bit and provided a reasonably subtle gloss; applying a gloss varnish would probably have been too much. Apparently Rotring inks aren’t available any more, but there are probably alternatives.

The manhole covers were painted a rust colour (Revell Aqua Color 83), then given a Raw Umber wash. The flash makes them look a bit paler than they actually are, but natural light was not an option today. Looks like I’ve overdone it with the black on the one pierced manhole cover – I may have to revisit that.

I rather wish I’d placed the pump at an angle so that you can see it more clearly. It’s another nice and atmospheric piece. The base colour is Revell Bronze Green (65), with the cast features picked out using Inscribe’s Honey Dew. I used rust again for the grating, and Revell Tank Grey for the base. It’s the same colour I used as the base colour for the cobbles, but left “as-is” without the further shading the cobbles received.

The snowman is painted white, but with a thin wash of Inscribe’s Blue Mist to give a little bit of depth to the shadows – pretty much washed out by the flash, of course. The scarf is based on one given to me by

msinvisfem. You may be able to guess which other scarf inspired that one!

A few days after placing my order, I got an e-mail from Nathan inviting any suggestions for other things to make. Rather excitingly, a couple of my suggestions seemed to be of interest, with a possibility that one may become available sometime in the year ahead. Something to look forward to…