Xmas is the season of food, and a couple of interesting examples have cropped up in St. Andrews recently. In the doorway of the erstwhile Pots and Pans, a 24 Hour Bakery has sprung up: 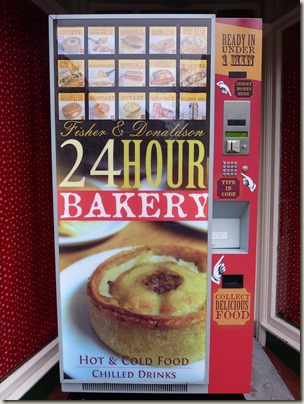 “24 Hour Bakery” appears to be a posh term for a hot-pie vending machine, where the definition of “hot pie” extends beyond the Scotch pie once favoured by Pie-Face, to include faux (flaky) bridies, fudge doughnuts and bacon rolls. Unfortunately, or perhaps fortunately, when I passed by it was reporting itself as being out of order. Apparently it sells out fast.

Somehow hot food seems wrong though. In Scotland, winter’s the traditional time for ice cream, as shown by the third image in this BBC photo gallery (a bit of a classic). I think rather than ice cream consumption being prompted by hot weather, a bit of a chill reminds Scots of what they could really do with right now. And lo and behold, Luvians has the answer: 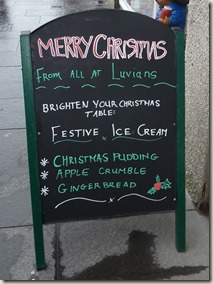 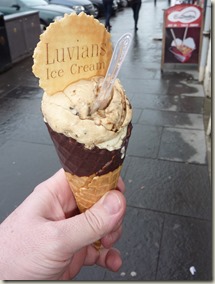 This time, the shop wasn’t out of order, so despite having got drookit in heavy rain earlier on I popped in and purchased a cone, with a scoop each of the Christmas Pudding and Gingerbread flavours. The Gingerbread, which wound up as the upper layer, was reminiscent of Starbucks’ gingerbread latte but a bit colder, and was very pleasant. There was a very slight nip of ginger to it, about right for a gingerbread. The Christmas Pudding flavour was less immediately distinctive, but had a brandied overtone and frequent hints of vine fruit or candied peel.

To be honest, it wasn’t really the weather for ice cream, but I enjoyed it nonetheless. It might be more successful at the Christmas table as suggested by the sign!