March the second, in September 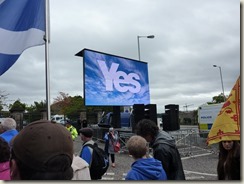 As advertised last weekend, yesterday I attended the second march for independence in Edinburgh. Turnout was considerably higher than last year with even a notable opponent suggesting that the lowest estimate for this year (the police estimate reported on news) was unlikely to be accurate. Most estimates put it between 20,000 and 30,000.

This time I wasn’t alone in the crowd. I met up beforehand with undecided friend

myceliumme (who has already put his account online), and as we marched past the Scottish Office we were joined by another friend we weren’t expecting.

I’m proud to say that both of my friends have English backgrounds (and I hope they’ll excuse me if I oversimplify there!). It’s not something that usually exercises me, but I’ve always had a lot – at times perhaps even a majority – of English friends, and of course it matters to me that they’re OK. Being confident that Scottish nationalism is not a threat to them is important, and something I had to satisfy myself of before changing my preference from devolution to an independent Scotland.

So it matters to me too that the friends that joined me were comfortable enough to do so.

The No campaign is keen to present nationalism as intolerant in the hope it’ll put people off, ignoring the aspiration of Yes campaigners to civic nationalism. In the words of Elaine C. Smith yesterday, “We are all Scots. No matter where you started out, be it Ireland, India, Pakistan, Poland, Somalia or England, if you live and work and contribute and love this country then for me you are a Scot.” That seems to me to be a good sort of basis for inclusion. (I’m sure it’ll be possible to opt out too!)

In a week when UKIP have covered themselves in whatever the opposite is of glory again, I’m just going to embed videos of the speakers and let you make up your own mind as to whether any comparisons with Scotland Yes hold up. Starting with MCs Hardeep Singh Kohli and Elaine C. Smith: