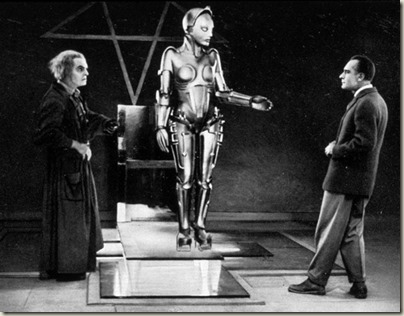 Last night, I watched The Complete Metropolis, or at least the version that’s as complete as we’re ever likely to get, although it has a few scenes still missing. It is the best version I’ve seen (and the fourth I’ve owned).

Funnily enough, the most immediately obvious improvement is to the captioning! The captions are translated from the originals, and since previously available versions of the film have been so heavily cut that the story is different, the captions have also been rewritten; often not very well. The original captions construct a better narrative. The few remaining missing scenes are replaced by captions in a different font, so you also know what you’ve missed.

Of course, although the captions create the best first impression, the “new” footage (largely unseen since the film’s first seventeen days of showing in Germany in 1927) are invaluable in re-establishing the intended narrative too. Two substantial subplots are reinstated, the symbolism around the seven deadly sins, the Book of Revelation, Babel/Babylon and Robot Maria’s residency in the Yoshiwara nightclub is more clearly spelled out, and we see rather more of the destruction of the machines and the underground city. The recovered footage is of poor quality, even after restoration, with a lot of vertical scratching and a bit of black boxing around the edge. I’m surprised they couldn’t have done a better job of removing the vertical scratching, but in the full context of the movie, honestly you won’t care tuppence.

The first “new” subplot concerns Josaphat, the Thin Man and Georgy 11811. Josaphat and Georgy 11811 make minor appearances in other versions; Josaphat is the administrator Joh Fredersen sacks early on, and Georgy 11811 is the worker whose shift Freder Fredersen takes over in his enthusiasm to find out how the other half live. The Thin Man, Joh Fredersen’s sinister enforcer, is largely absent from other versions, as is the subplot that intertwines these three. Although Georgy 11811 remains a minor character, it’s nice to see that his arc contains both a fall and redemption, and I would go so far as to say that Josaphat becomes the third heroic character in the film, after Freder and Maria.

The second re-established subplot is the relationship between Joh Fredersen, Rotwang and the deceased Hel, loved by them both. Although this is touched on in previous versions, with more time devoted to it it helps to better explain the character of Rotwang. He’s still the archetypical mad scientist with wild hair, staring eyes, and a mechanical hand – but we have a better understanding of why he’s as mad as a box of frogs these days and why he does what he does, rather than him appearing to be a rather random agent of chaos.

More is made of the religious symbolism in the film, and it becomes clear why it’s there. This is much better handled by the previously missing footage, and unified by a sequence where Freder’s hallucinating. Now I finally understand how the statues of the seven deadly sins come to life! 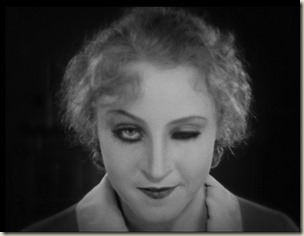 Finally, we see rather more of the destruction of the machines and the underground city and although there’s little added to the plot by these sequences it does help to flesh out why things are happening as they are. Without these sequences, some of the destruction seems a bit random, but they become more coherent with the missing footage added back in. Particularly worthy of note are Robot Maria and the mob storming the Moloch Machine, and a much fuller sequence of the destruction of the Heart Machine, which triggers the flooding. First of all, the Heart Machine is clearly identified as such, and then we see how the mob get at it, leaving me with rather more sympathy for Grot, the Chief Foreman, than I’ve felt in previous versions. The flooding sequences are extended, and more time’s spent building up their tension.

Unless you have a fondness for 1980s music – in which case, Giorgio Moroder’s tinted version is still worth watching – this is the version of Metropolis to see, whether you’re coming to it fresh, or you’ve seen it before and would like to  revisit it. Unless those few missing scenes turn up, this is your best chance to see the movie pretty much as Fritz Lang intended. Ultimately, although it’s still very much of it’s time, Metropolis is a better constructed and more modern movie than you may have thought.