Within the last couple of years, laser-cut MDF seems to have taken off as a material for building wargaming/roleplaying scenery with. Last year at Claymore, I picked up a small selection of carts and the fanciest looking of Battle Flag’s range of Western buildings. It so happens this is the bordello.

I didn’t think I could improve on the colour scheme in the publicity artwork, so I went for it wholesale; a bright red (toned down a bit by the MDF surface it was applied to), a golden yellow around windows and doors, and white for the balustrade. 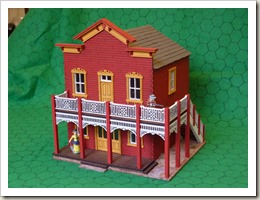 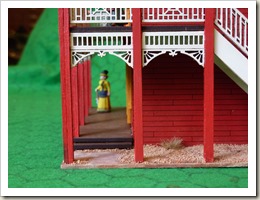 Where I did think I could improve a wee bit was on the interior, which can be exposed by lifting off the roof and the floor of the upper storey. The exterior has planks etched into it and ornamental carvings, but apart from a couple of planked floors the interior is very plain. I didn’t think large areas of flat, brushed colour were going to look too great and I’ve never really got into spraying or airbrushing for this sort of thing (a lot of hassle setting it up, messing about with mixing and thinning paint if you’re airbrushing, and cleaning up afterwards).

It occurred to me that it would probably be possible to find a bit of Victorian wallpaper on the Internet, hopefully in a form I could use. Right enough, there appears to be a number of possible sources. The site I wound up using was Jennifer’s Printables (a collection of free printable materials for doll’s houses) that has a page dedicated to Victorian wallpapers, but if the materials there aren’t to your taste there are alternatives.

I selected a relatively plain wallpaper for downstairs and other public areas, and a variety of richer papers for upstairs. There aren’t actually any internal partitions (nor stairs!) included for the interior, but they are marked out on the floor that lifts out, so I though I might as well try to give each an individual character.

I could have just printed them out onto decent paper and stuck them on, but that would have involved being sure they were cut exactly to shape for awkward bits like windows and doors, and my experience with gluing paper is mixed; Copydex is pretty good, but it doesn’t take much going wrong with paper in order to end up with a bit of a nasty mess.

So I thought I’d try something new, and bought some inkjet water-slide decal paper from Crafty Computer Paper.

Printing the wallpaper was a scoosh. I lined up the paper samples to the measurements I wanted using PagePlus, and rescaled them a bit so that the patterns looked OK; then when a few test prints satisfied me that I’d got it about right I printed my wallpapers onto a couple of A4 sheets of the decal paper.

That puts a layer of ink on top of the water-slide substrate, but if you just stuck that into water most ink would not come through the experience well. A layer of varnish sprayed on top will seal the ink between the two layers. I played safe and bought the brand that Crafty Computer Paper recommend for the job. Once the varnish had dried, it was time to apply the transfers. Click through for a closer look: 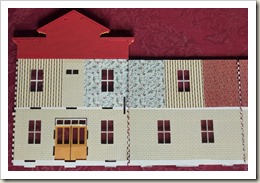 There are two transfers on each wall of the house, one for upstairs and one for downstairs, each cut to size and applied over several layers of almond-coloured paint. The obvious gap between the storeys is well-hidden in practice once the floor is in place, but with the benefit of hindsight, I might have cut them a little more oversized – or even as a single transfer per wall – in order to eliminate the worries about that. I was nervous about how robust and easily managed such large transfers would be, but they held up very well and were fairly manageable. Positioning one edge and gradually sliding the backing paper out seemed to do the trick. It may also have helped that I pre-brushed the surfaces with Micro Set, and also applied more once the transfer was in place.

It was my original intention to use a sharp knife to cut out the excess transfer material over the windows and do, er, something else for glass, but at this stage I discovered that the pattern I’d chosen for the downstairs wallpaper also looked pretty good as patterned glass. So I left it. You can see it in this picture (again, click through for a closer look, the effect’s a bit subtle for blog-sized photos): 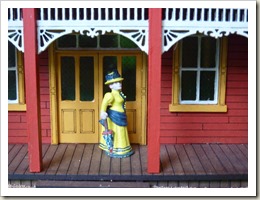 You can also see one of the nice things about laser-cut MDF is that It’s pretty convincing as wood. There’s a slight texture to it that just works at this sort of scale that you wouldn’t get from anything else.

I stuck with my intention of cutting out the upper storey windows (stripy wallpaper isn’t so convincing as a pane of glass), but instead of using a thin bit of clear plastic in its place, as I’d originally thought, I used offcuts of the transfer paper to make clear windows that matched the patterned ones downstairs. The result is a bit blurrier to look through than the plastic would have been, but if anything I think that adds to the effect. Yay, serendipity! 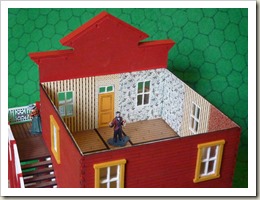 Happy with my results, I began assembling the walls permanently, and it was round about then that I discovered that, in all the best traditions of wallpapering slapstick, I’d papered over a door. There’s a passage across the middle of the top floor, leading to the door that opens onto the balcony, and with no markings on the interior wall apart form the two lights above the door I’d managed to ignore it. With the walls already assembled, it was a bit awkward to mark it in retrospectively, but I managed a passable result.

I may do a bit more to try to tidy the rough edges of that up, and maybe apply some weathering outside, but fundamentally the building’s done for now. Obviously there’s more could be done to build up a detailed interior, but that’s for another time (if ever). 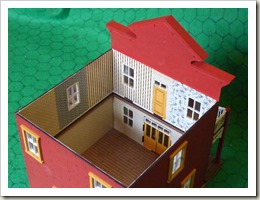 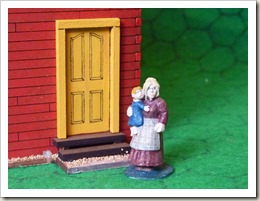 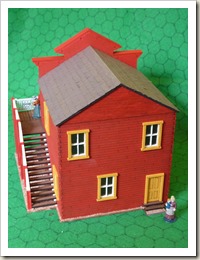