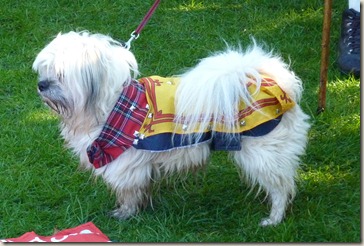 Yesterday I attended the first of three annual March/Rallies that are to be held in the lead up to the Scottish Independence Referendum in 2014. The last (and only previous) time that I was part of a public expression of opinion would have been towards the end of the Thatcher government in the 1980s, when I was part of a protest against Michael Forsyth opening the East Sands Leisure Centre in St. Andrews. I’ve nothing against the fine institution that is the East Sands Leisure Centre, I should hasten to add; just the company it kept at the time.

That was an angry protest; very civilised, because it was St. Andrews, and quite small scale, but angry at the things that the government of the time was doing. Although it was also very civilised, yesterday was otherwise a different kettle of fish.

It was a bit bigger, for a start. 9,500 according to the organisers; 5,000 according to a police estimate, but that was apparently made before the march started and certainly not at peak attendance, which would have been at the start of the rally in Princes Street Gardens. 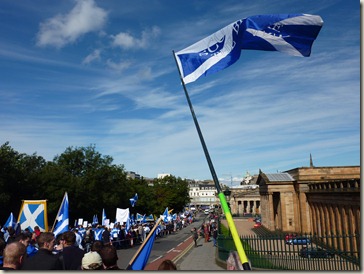 The main difference, though, was atmosphere. This wasn’t a protest against something, it was a statement of support for something, and the overwhelming mood was positive. At the rally, I listened to about two and a half hours of people giving speeches (interspersed with musical interludes, of which see a couple below), and it was only towards the end of that that we started to get some angry speeches – from trade unionists railing against the current Westminster government. While I could sympathise with their reasons, I’m glad that the majority of speakers were not in that mould. That’s not to say that other speakers didn’t have an occasional dig, but it would be as an aside in a more forward-looking speech.

Another good thing its that it clearly wasn’t about one party. Obviously there is one party which has an enormous presence in this debate, but after a speech from the First Eck there were speakers from other parties and none. Margo McDonald was first up, followed in an order I can’t recall by Dennis Canavan and speakers from Labour for Independence, the Greens and the SSP. Conspicuous by their official absence were the current parties of Westminster government – which is a shame, as there must be some who have an interest in Scottish independence. I hope someone in those parties has the guts to take the sort of stand against their leadership that the Labour for Independence guy has. One journalist came out in support – the chronologically gifted (her words!) and more-than-usually-worth-reading Ruth Wishart.

Anyway, I just wanted to write about the experience of being there, not to change your minds. Having said that, if you want to accompany me next year, that’d be great.

Dougie MacLean sang Caledonia for us, which was well received:

Rock bagpipes have been done before, but Gleadhraich were rather good at it and moreover come from Carnoustie. Shame I didn't capture their rendition of “My Generation”, which was also highly enjoyable:

If you want to hear "My Generation", Gleadhraich themselves have an earlier performance on YouTube.